The Disease Transcriptomics Lab, led by Nuno Barbosa-Morais, was created at the iMM in 2015.

We are a group of researchers applying mostly computational approaches, particularly those involving the analysis of high-throughput genomic and transcriptomic data, to fundamental questions in biomedical research. We have a long-term interest in the systems-level transcriptional regulation underlying mammalian cell specification, often perturbed in disease. We aim to understand how RNA-level (transcription initiation, splicing, etc) changes in (mostly) human tissues increase proneness to diseases, namely cancer, neurodegenerative disorders and other ageing-related pathologies. We thereby aim to identify molecular targets for functional exploration in vitro and in vivo. We also combine molecular and clinical information for the unveiling of novel candidate prognostic factors and therapeutic targets. Along the way, we develop some tools for assisting non-computational scientists in their analyses of transcriptomic data.

We are members of the RiboMed (RNA in disease) project and we lead iMM's participation in GenomePT, a distributed genome sequencing and analysis infrastructure integrated in the Portuguese Roadmap of Research Infrastructures. Nuno also coordinates the Computational Biology efforts of the iMM-Laço Hub.

Please get in touch (nmorais[at]medicina[dot]ulisboa[dot]pt) if you are interested in our work and consider being part of our team. Please also check the contact page for more details.

March 2022: Rita and Alex started their PhDs in our Lab, being part of the LisbonBioMed program.

October 2021: Nuno was in Bordeaux as an instructor at the Cajal Training course on Ageing Cognition.

May 2021: our collaborations with the Garinis Lab on how splicing factor XAB2 interacts with ERCC1-XPF and XPG for R-loop processing and with the Bernardes Lab on how allosteric antagonist modulation of TRPV2 by Piperlongumine impairs Glioblastoma progression are now published.

April 2021: Mariana was one of the scientists involved in the “Conversas com Cientistas – Décadas de Ciência para Dias de Vacinas” campaing, that aimed at explaing COVID-19 vaccines to the general public.

March 2021: Marie brilliantly defended her PhD Thesis! Here is a sketch in her own words:

September 2020: Marta has been awarded an FCT PhD Scholarship to start her PhD with us in May.

September 2019: Mariana won the 1st prize of the Young ICSA Poster Award at the ICSA 2019 conference – “Cellular Senescence: the bright & dark side” in Athens. 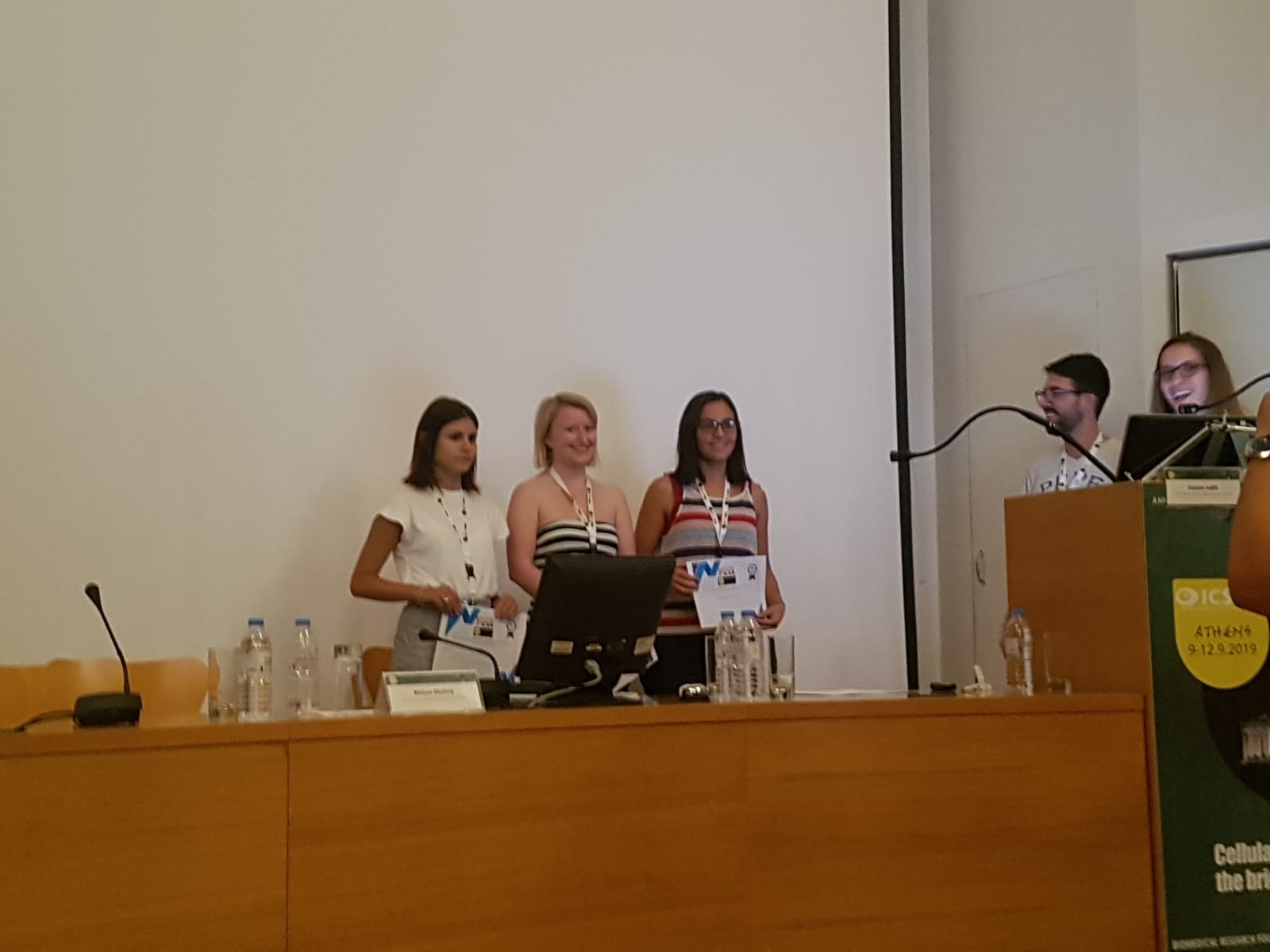 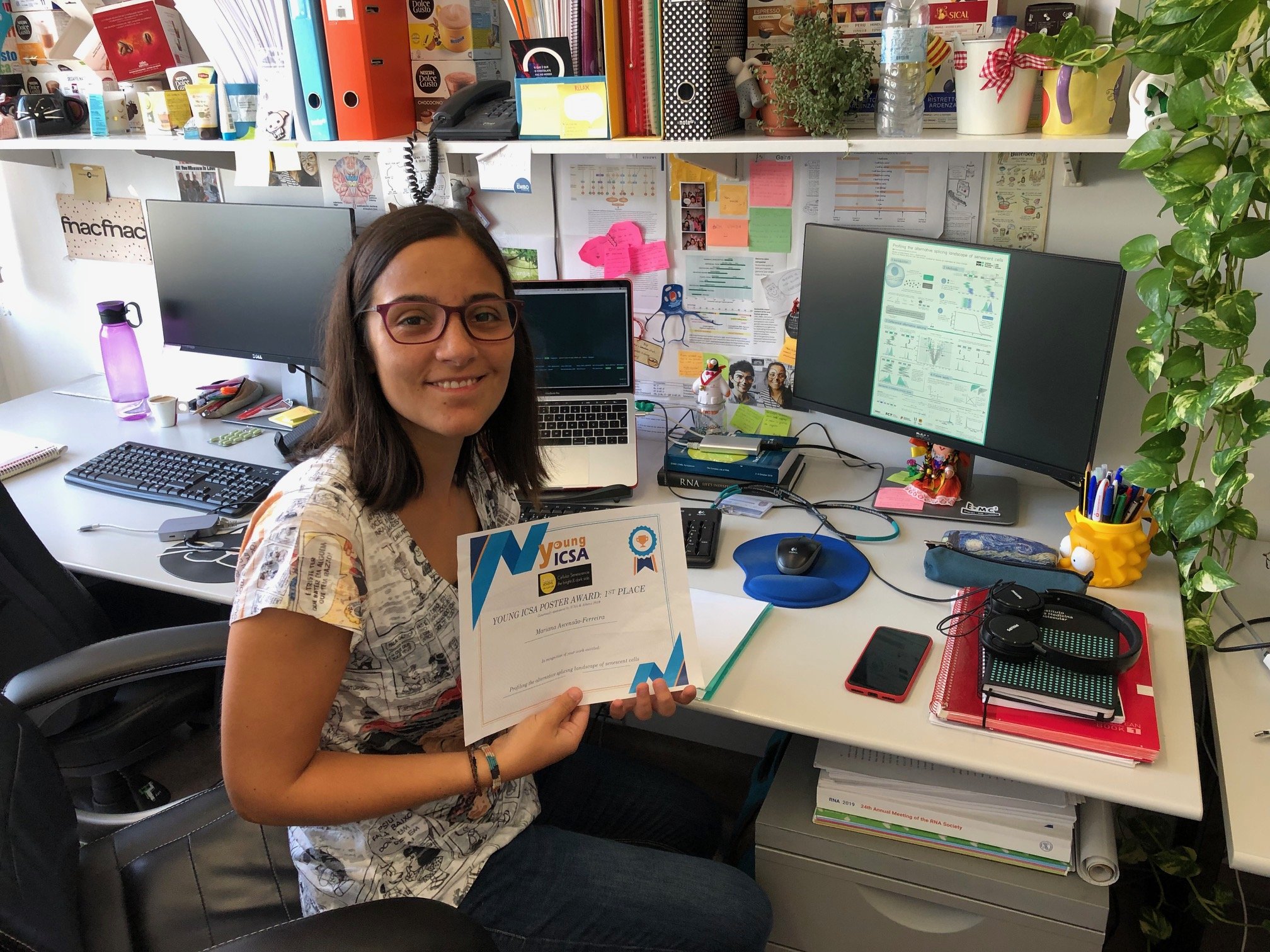 September 2019: Our collaborative effort with the Elliott Lab on alternative splicing patterns in prostate cancer has just been published by eLife.

March 2019: Our article "Pan-cancer association of a centrosome amplification gene expression signature with genomic alterations and clinical outcome" has just been published by PLoS Computational Biology.

January 2019: The talent of our Lab's students goes way beyond Science. Have a look at this video-performance, prepared for the iMM Got Talent show, part of the iMM Christmas party. Those doing research in Portugal may relate to it...

October 2018: Our article "psichomics: graphical application for alternative splicing quantification and analysis" has just been published by Nucleic Acids Research.

July 2017: Nuno Agostinho has been awarded an FCT PhD Scholarship to start his PhD with us in September.

26 June 2017: Bernardo presented a poster at the 3rd EACR Conference on Cancer Genomics in Cambridge, UK.

28 May 2017: Nuno gave a lecture at the IHMT PhD students Retreat (Sesimbra, Portugal).

19 January 2017: Nuno gave a seminar at the International Institute of Molecular and Cell Biology in Warsaw (Poland), being also a panelist at the Career Path Day.

18 October 2016: version 1.0.0 of Nuno Agostinho's package psichomics has been included in the latest release of Bioconductor.

30 September 2016: Carolina presented a poster at the 1st Symposium on Aging Research @CNC in Coimbra.

28 September 2016: Nuno gave a talk at the 4th Post-EURASNET Meeting in Poznan, Poland.

7 September 2016: Nuno gave a talk at the 2016 Summer School in Computational Biology, in Coimbra.

1 September 2016: Nuno was a speaker at the EMBO Young Scientists' Forum 2016, with Lina, Marie and Nuno A. presenting posters.

6-12 August 2016: Marie presented her work at the Gordon Conference and Research Seminar on Neurobiology of Brain Disorders in Girona, Spain.

13 May 2016: Nuno participated in the EMBO Young Investigator Meeting in EMBL Heidelberg, Germany.

6 May 2016: Nuno participated on a debate on "Creativity and Science", part of the RedeValor Conference at the University of Lisbon Rectory.

30-31 Mar 2016: Nuno lectured in the course on NGS Data Analysis, RNAseq, ChIPseq, part of the Gulbenkian Training Programme in Bioinformatics.

22-26 Feb 2016: Nuno coordinated and lectured in the Bioinformatics course for the PGCD, Graduate Program Science for Development in Praia, Cape Verde.

28 Dec 2015: Nuno participated in the 4º Fórum Anual de Graduados Portugueses no Estrangeiro (GraPE 2015) - "RE:Inventar Portugal", in Guimarães, having been a last-minute replacement for Elvira Fortunato in the closing debate.

27 Nov 2015: Lina is one of this year's Colombian Heroes and gave an inspirational talk at the Héroes, in Bogotá.

16 Nov 2015: Bárbara has completed her Masters in Biomedical Engineering by brilliantly defending her thesis.

4 Nov 2015: Nuno Agostinho received the Maxdata Award Excelence in Informatics, having been the top first-year student of the FCUL MSc in Informatics.

15 May 2015: Marta went (again!) on national TV to explain genetic diseases to the public. You can watch it here.

13-15 May 2015: Nuno participated in the EMBO Young Investigator Meeting in Barcelona, Spain.

27 Mar 2015: Marie won the prize for the best presentation by a 1st year student at the IX IMM/CAML PhD meeting.

11 Feb 2015: Marta went on national TV to explain cancer predisposition to the public. You can watch it here.