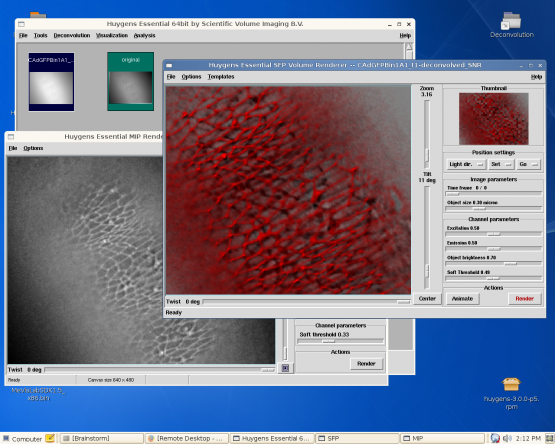 The system has been configured to be straightforward and easy to use.

“Deconvolution is often suggested as a good alternative to the confocal microscope. Deconvolution is a computationally intensive image processing technique that is being increasingly utilized for improving the contrast and resolution of digital images captured in the microscope. The foundations are based upon a suite of methods that are designed to remove or reverse the blurring present in microscope images induced by the limited aperture of the objective. Nearly any image acquired on a digital fluorescence microscope can be deconvolved.”

Almost any fluorescence microscope can be used with Deconvolution. For example:

There are two ways to access the Brainstorm server in order to use the deconvolution software:

The Huygens Remote Manager is quite simple to use and is quite 'nice' if multiple people are using the system. The idea is that you can add the images you want to deconvolve into a queue and after a few hours they will be deconvolved and ready to download.

Note: will only work inside IMM.

VNC is less friendly but lets you deal with the Huygens software directly. You can access the VNC interface through an internet browser like Internet Explorer or Mozilla Firefox. Use the address: http://brainstorm:5801 - will only work inside IMM. Here's a small tutorial.

Note: If you're going to use VNC, do not forget to book the system in the booking system before using it. There can only be one user using the system at a time!

Moving files From and To the Brainstorm server

The folder Deconvolution (visible in the Brainstorm Desktop) is shared in the network (no password or username) in order for you to transfer you files:

Note: For deconvolution with the Huygens Remote Manager use the folder brainstorm\deconvolution\HRM\<your_Huygens_Remote_Manager_username>\huygens_src.

Very important: your data must have almost no saturation!

When you do deconvolution there's some information that you need to know:

Back to the Equipment page